Note: a more complete manual was kindly contributed by JDN. We will integrate this work soon.

Messages are organized as in an advanced web forum, with the following key features: 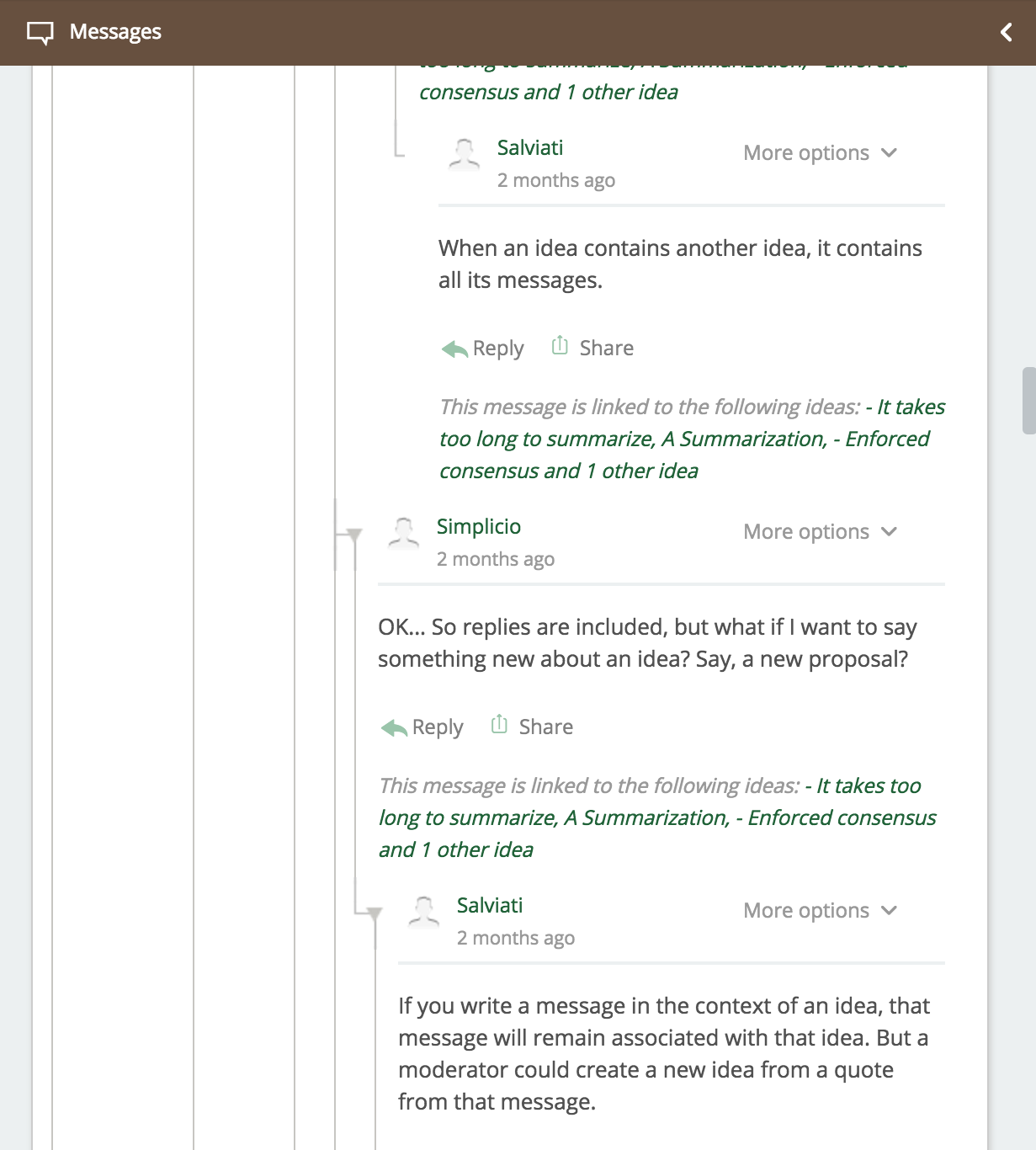 Threaded conversations
Answers to a message are displayed as a foldable hierarchical list. Flat lists, as used by Facebook or Gmail, are adequate for reactions (which do not themselves call for answers) or quick back-and-forth between a few people, but are impossible to untangle when multiple participants respond to a message of a few days ago, which is frequent in a large community.
Interaction with email
IdeaLoom can import conversations from mailing lists, which are still a major means of communication for many communities of practice. It can also import conversations from a RSS/Atom feed (used by many blogs), Facebook page, and even (with the help of Edgesense, a Catalyst technology) a Drupal site. IdeaLoom can also notify participants of selected messages by email, and can replace a mailing list; email replies to those notifications will be part of the IdeaLoom conversation. This way, it is possible to use IdeaLoom to organize a conversation that happens in an established community, without asking the community to learn a new tool.
Automated translation
IdeaLoom can use automatic translation services to display translated versions of messages to a linguistically diverse community
Moderation
Messages can be moderated by designated individuals

Parallel to messages, IdeaLoom maintains a structure of ideas. The ideas form a concept map of the conversation topics, and are progressively created, enriched and refined as the conversation progresses. Selected participants identify ideas in the conversation as quotes extracted from the messages. Those extracts are what mostly bind ideas and messages together. Messages can also be created directly in the context of an idea, and be bound to this context without an extract.

Features of the idea system: 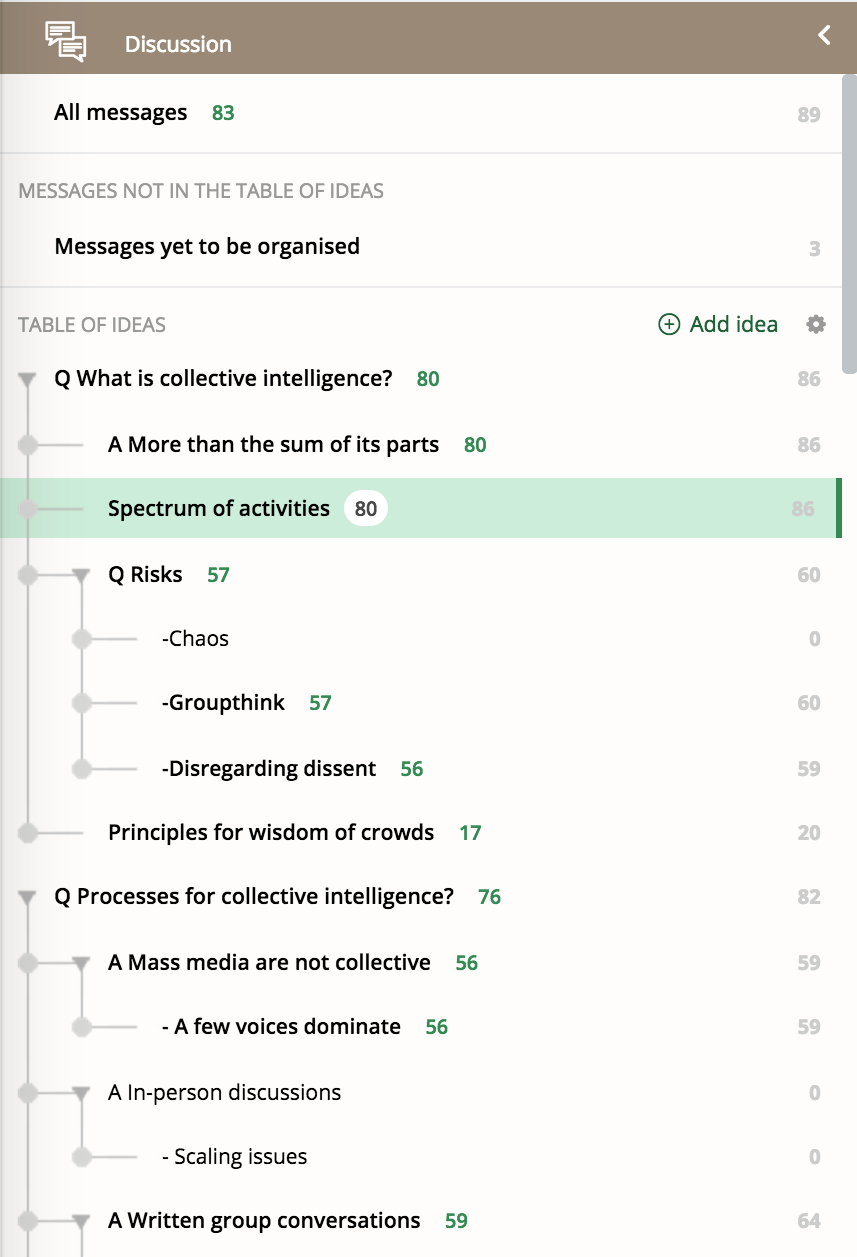 Table of ideas
At the moment, all ideas are represented in a table of ideas. This structural view is meant to convey the shared understanding of the community, as extracted by the idea harvesters. 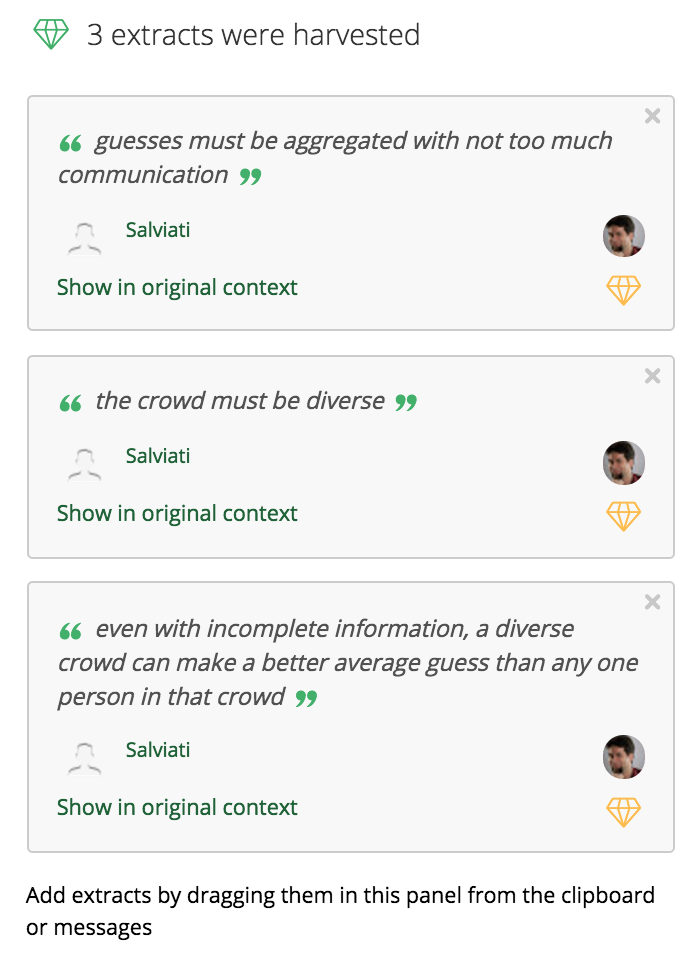 Message extracts
Extracts can be taken from any message, or from a web page. Extracts can be stored in a clipboard, or connect a message and its subsequent thread to an idea.

Related messages
From selecting an idea, you get to view all conversations (message threads) that were related to that idea, or to any sub-idea of the selected idea. You can see at a glance whether new information was added to that idea. Sub-communities of conversation can form around any idea. It is also possible to show ideas related to a given message. 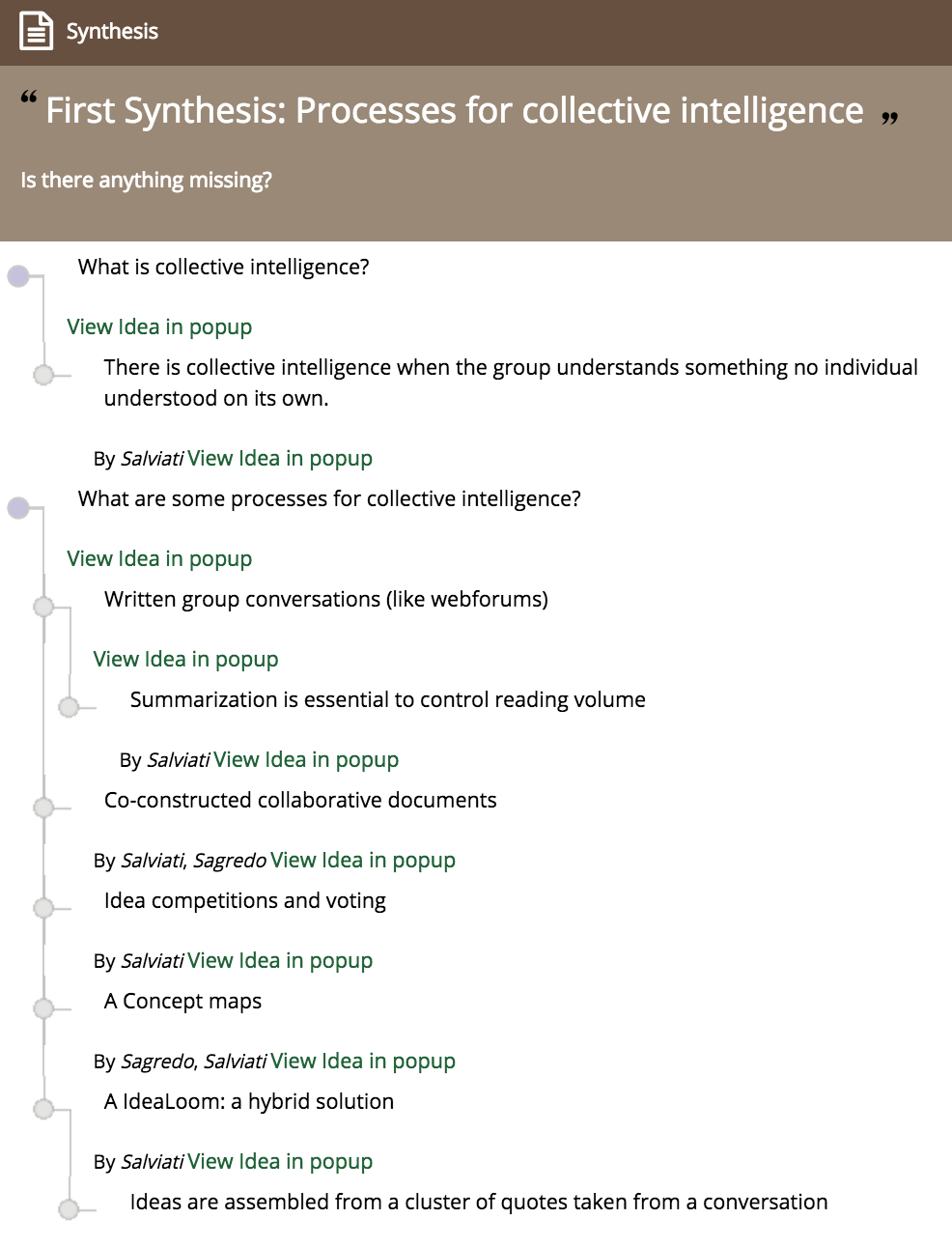 Synthesis
The community moderators can propose a more narrative version of a subset of the table of ideas, where each idea is described at some length. These narrative sytheses can be pushed by email to participants, to mark a new phase in a conversation, to invite fragmented sub-communities to gather, or to rekindle a dying conversation. It has been observed that synthesis can provoke passive participants to give key input.
Collaborative idea edition
Edition of the table of idea is real-time, and multiple community harvesters can be working on the same table of ideas
Announcements
Moderators can give instructions to participants as announcements, showed above the messages, in the context of a given idea. Optionally, this announcement can also be displayed in the context of sub-ideas.

The following tools have been designed to support some of these aspects of collective intelligence:

IdeaLoom is designed to be methodologically neutral, and does not dictate the roles in your community management process. You can define your own roles, and what permissions are attached to those roles. Your discussion can be public, private (by invitation), or allow restricted self-registration; participants can register with email or social network accounts (and IdeaLoom can keep track of their identity across accounts).